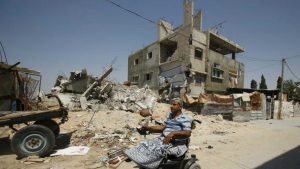 One thing that I fundamentally believe is that there is a secondary benefit to supporting Palestinian liberation: everything they do to the Palestinians will eventually get done to the rest of us. Just ask everyone freaking out about the NSO group’s pegasus. This harkens back to one of my favorite anecdotes of Fanon talking about a lesson from his teacher (who I believe was Cesaire):

“At first thought it may seem strange that the anti-Semite’s outlook should be related to that of the Negro-phobe. It was my philosophy professor, a native of the Antilles, who recalled the fact to me one day: “Whenever you hear anyone abuse the Jews, pay attention, because he is talking about you.” And I found that he was universally right—by which I meant that I was answerable in my body in my heart for what was done to my brother. Later I realized that he meant, quite simply, an anti-Semite is inevitably anti-Negro.”

Likewise, I would argue today, one should listen carefully to whenever you hear people dismissing Palestinian humanity and their desire for liberation from apartheid and colonialism. That person is comfortable with some kind of freedom chart with variations for different people and you might be cool with them today, but who knows what tomorrow brings?

After years of dishonest laments about ‘why the palestinians couldn’t just be peaceful?’1, the full court press against Boycott (peaceful), Divest (also peaceful), and Sanction (still peaceful) are grating as hell. But the war against BDS has no such ethical qualms with things like hypocrisy. And then we find ourselves in weird places like this:

Like ALEC, one of SFOF’s top priorities this year will be fighting “woke” capitalism and “defend[ing] the market economy” against the growing Environmental, Social and Governance (ESG) movement among corporations to consider community interests and not just shareholders. At its December 2021 States and Nation Policy Summit, ALEC members in the Energy, Environment and Agriculture Task Force unanimously passed an anti-boycott model bill that would punish financial companies that stop investing in oil, gas, and coal by barring them from receiving state government contracts or managing state funds, CMD first reported.The bill was based on language from “anti-BDS legislation supported by ALEC” targeting the movement to boycott, divest, and sanction Israel over its oppression of Palestinians, and pitched by Jason Isaac, the Texas Public Policy Foundation’s (TPPF) director of Life: Powered,  as a way for states to “fight back against woke capitalism,” according to an email first obtained by CMD.

So the people who created anti-BDS legislation are going to strip off some parts, add some aftermarket language, and pitch it on the lot as a way to stop activists from challenging oil companies destroying the entire planet.

1. If you need to know why this lament is dishonest, this blog is not for you. Head down to the library and go read some fucking books.